The Source of the Problem:
DARK MONEY 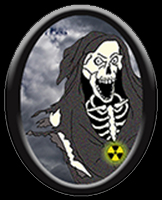 How do we keep getting laws that force our communities to accept millions of gallons of radioactive poisonous waste to inject under our aquifers, release into our air, and dump onto our roads? Why are the regulations that protect our families from pollution and environmental harm disappearing?
Let me introduce you to the American Legislative Exchange Council, also known as ALEC.  ALEC is a powerful group of corporations organized by the billionaire Koch Brothers.   ALEC recruits State and Federal legislators from
around the nation and pays for them to attend secret closed meetings with industry lobbyists. At these meetings the lobbyists present your elected officials with copies of legislation written by the corporation's lawyers. If your legislators agree to help make the bill a law they will receive generous  corporate financing and support during their next election campaign.
If they refuse they can look forward to facing a very well-funded, corporate-friendly opponent and lots of negative political action committee ads in their next primary election race.
This is a system of legalized bribery that has become a part of the legislative process in the Ohio State House. Legislators come and go but ALEC will always be there to throw its hammers around and corrupt the our representative government. This will not end until the Supreme Court Ruling that defined campaign contributions as free speech is overturned. 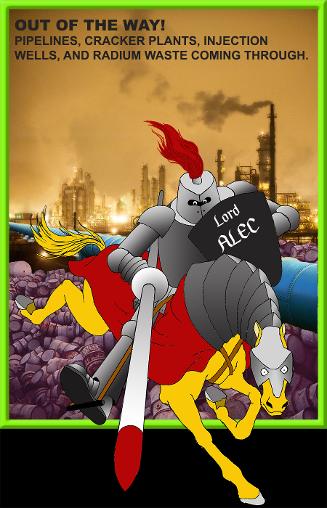 We like to think that our lawmakers follow a democratic process that represents the interests of the people of Ohio. In truth, much of their legislation promotes the profits and needs of business and industry while ignoring real dangers and risks to our community's health, property, environment, and tax dollars.  Case in point;  Coshocton's own State Rep, House Speaker Larry Householder was recently arrested by FBI agents at his rural Ohio farm.
House

holder was taken into custody in connection with a $60 million bribery scheme allegedly involving state officials and associates. Four others were also arrested: former Ohio Republican Party Chairman Matt Borges, Householder adviser Jeffrey Longstreth and lobbyists Neil Clark and Juan Cespedes.
The charges are linked to House Bill 6 passed last year that provided a 1.3 billion dollar bail out for two nuclear power plants and two old coal plants, (one in Indiana), while gutting Ohio's subsidies for renewable energy and energy efficiency.
Current plans to repeal the House Bill 6 do not restore the incentives for renewable energy.
BUT, the corruption didn't stop with the legislative process.  The industry also was able to dump millions into the election through Householder to elect supportive candidates and defeat those opposed to the bail out bill. And a grassroots citizens ballot initiative to repeal the bill after it became law failed in no small part because citizen petitioners were also met with millions of industry dollars in opposition to obstruct their efforts.